There are hundreds of different job roles in Film & TV and the range of skills they require is incredibly vast… Therefore we wanted to bring together a variety of individuals from different areas of film to talk about how they broke into the industry along with the advice they can offer.

We are very excited to bring these talented individuals to this year’s festival and our guest panellists will be;  Matthew James Wilkinson (Producer – Yesterday),  Georgette Turner (Location Manager – Wonder Woman), Matt Waites (Sound – All is True, His Dark Materials) and Catherine Derry (DOP – Been So Long) **Please note guests are subject to work commitments and we will be aiming to add another additional guest to this list**

Here is a little bit more about our guests:

Matthew James Wilkinson: runs a Film and TV production company, Stigma Films which was set up in 2011. Producer Matthew James Wilkinson was previously a Development Executive at Working Title Films, where he worked on the script development of a number of high-profile features. Stigma’s first production was the BFI-funded suburban thriller, SLR. The film was nominated for an IFTA (Irish BAFTA) and short-listed for the Oscars.

In 2012, the company signed a 1st look deal with Pathe UK to develop high concept genre features for an international audience. Their first feature was sci-fi actioner, The Call Up.

Matthew recently completed work on, Yesterday, for Working Title Films/Universal. The film was released on June 28th this year.

Previous titles include, contained thriller, Kaleidoscope, starring Toby Jones and Anne Reid, which launched at the Edinburgh Film Festival in 2017, winning Anne Reid the ‘Best Actress Award’. The film played as part of FilmFour’s ‘FearFear’ genre festival and will air on Film4 this October. IFC Midnight released in the US. Comedy/horror, Double Date, starring Michael Socha and Georgia Groome also premiered at the Edinburgh Film Festival, and went on to play FrightFest UK, winning Writer/Actor Danny Morgan the ‘Genre Rising Star Award’. It took top prize at Strasbourg, and was released across 65 Cineworld cinemas in the UK & Ireland.

Stigma produced, Floor 9.5, a horror/chiller for Fox/Ryan Murphy (exec), which aired on US TV to great acclaim as part of the Mars/Skittle ‘Halloween’ season of shorts. Ernestine&Kit, written and directed by actor Simon Bird (THE INBETWEENERS), was part-funded by Creative England and premiered at SXSW Film Festival in Austin, Texas. It was also nominated for an ITFA.

Stigma are about to go into pre-production on the BFI-backed ghost story-horror, The Power, with writer/director Corinna Faith and are finalising cast on Sci-Fi thriller, Gateway 6, with Olga Kurylenko.

Georgette Turner: works as a Supervising Location Manager. based in London, Georgette is currently heading up the locations team for the additional photography unit on Wonder Woman 2. Her credits as location Manager include Fantastic Beasts and Where to Find Them, Wonder Woman, Night at the Museum and Tarzan the Untamed.

Georgette is chairman for the location managers division of Bectu ( the UK union) and was the UK location representative for the major Motion pictures film agreement which was historically signed in the UK in 2018.

Georgette is also the Treasurer for the LMGI (Location Managers Guild International) and sits as board member on the LMGI.

Matt Waites: His career started off in music production but he later incorporated his technical knowledge and love of film and moved into post production sound, working primarily in sound effects editing, sound design and foley. He has amassed a range of credits over the last 8 years, from comedy, drama to feature film, highlights include being part of the BAFTA nominated sound team behind ITV’s ‘Cilla’, being a MAS awards finalist for his sound design on the short film War Paint, working on Kenneth Branagh’s ‘All is True’ and Simon Pegg & Nick Frost comedy horror ‘Slaughterhouse Rulez’. Matt is currently working on the BBC/HBO adaptation of Philip Pullman’s ‘His Dark Materials’ and upcoming Rosamund Pike feature ‘I Care A Lot’.

Catherine Derry: Is a member of Illuminatrix, a collective of experienced and talented female cinematographers based in the UK and working internationally. Short film Bad Dreams won Best Cinematography at Indie X Film Fest in LA and Best Cinematography at Jelly Film Festival in Hollywood. Catherine’s most recent independent feature film, Zebra Girl, a psycho thriller with a bold streak of pitch black humour, is currently in post-production. Her previous feature film, Been So Long, screened at London Film Festival and can be found on Netflix (a deal understood to be the largest single acquisition of a UK film by the streaming giant, according to Screen Daily).

This event will be chaired by Professor Keith Johnston (UEA) 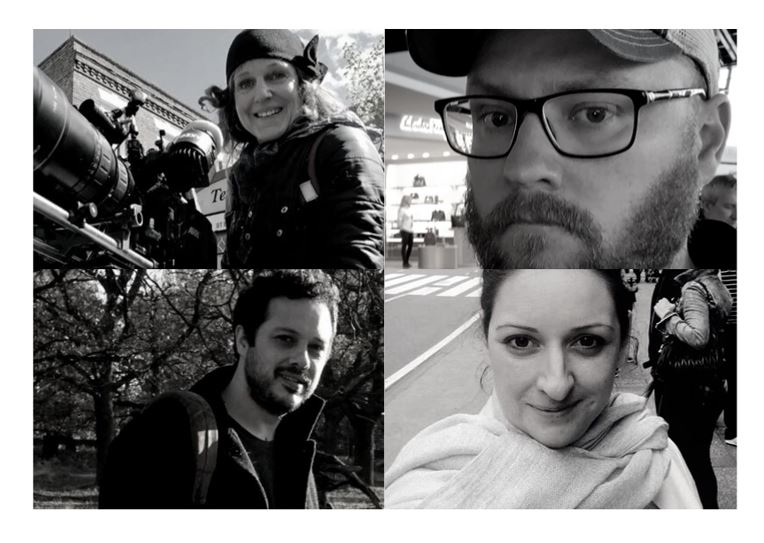