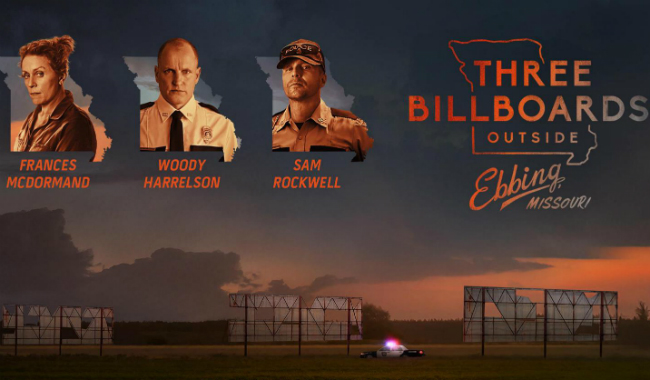 Martin McDonagh’s Three Billboards Outside Ebbing, Missouri is a moral ethics gem, and a moral ethics nightmare. The course-charactered Mildred Hayes (Frances McDormand) is on the prowl for justice following the dreadful murder of her daughter. Like the stagnant court case, three neglected billboards stand on a forgotten road, until Hayes pays the price for billboard rental and vengeance. The first sign reads, in impressive colossal font: “Raped While Dying’, while the others question the police force’s muddled priorities and lost initiative.

McDormand’s character  execution verges on flawless. Hayes is mesmerisingly fearless in her army overalls, with countless stern stares and forceful, often comedic aphorisms and defensive speeches. Her placement alongside the racist bigot Jason Dixon (Sam Rockwell), makes for an infuriating clash of motives and genius comic relief. As a clueless and ignorant officer, Rockwell plays a crucial part in Three Billboard’s take on black comedy. With a comically low IQ and a history of unspeakable abuse, he is the epitome of this line, delivered by Sheriff Bill Willoughby (Woody Harrelson): “You got rid of every cop with vaguely racist leanings, you’d have three cops left and all of them would hate the fags.” It’s explicit and crude, but that’s what Three Billboards excels in.

The look of the film is clean and raw. With Ben Davis’ recognisable cinematography, the stark clarity reflects the exact mood of the narrative. Three Billboards is undeniably sharp in portraying innate pain and grief. In fact, several character arcs advance the film into a social psychology field day. One questionable ‘transformation’ is that of Dixon. At the film’s end, a subtle reconciliation is made between himself and Hayes, which could be seen as a plea for forgiveness or sympathy. The film’s clumsy handling of other types of oppression, however, makes this a bold approach for the audience to process. Mentions of habitual racism are nonchalantly swept under the carpet, and we hear no more of how Dixon tortured a black man in custody. Nonetheless, Rockwell’s deliverance is skilfully indelible. He disorders our preconceptions, inspires animosity and pity, and all the while, his ignorance motivates jaw-clenching laughter and exasperating facepalms. Three Billboards is a probing commentary on human emotion and our relationship with civil rights. If the ending’s sudden resolution questions the genuine and provokes controversy, it’s important to note that the film also introduces a hope for humanity. With the scrutiny of substantial themes, the tragic but much needed transformation of Dixon can be blown-up to a larger scale: if we see Three Billboards as McDonagh’s microcosm, at least hope has been rectified.

In the space of 115 minutes we’re mourning the characters losses and hoping alongside their hopes. Hayes’ son obviously struggles with his family’s known dysfunctions, and faces the conflict of supporting his volatile mother while defending her from his evasive and abusive father. If McDonagh’s filmmaking was a strategic game of chess, he would undoubtedly win. Each placement, whether it be the symbolisation of Hayes relentlessly potting plants, or Willoughby’s poignant suicide note, is enacted with thorough care and concern.