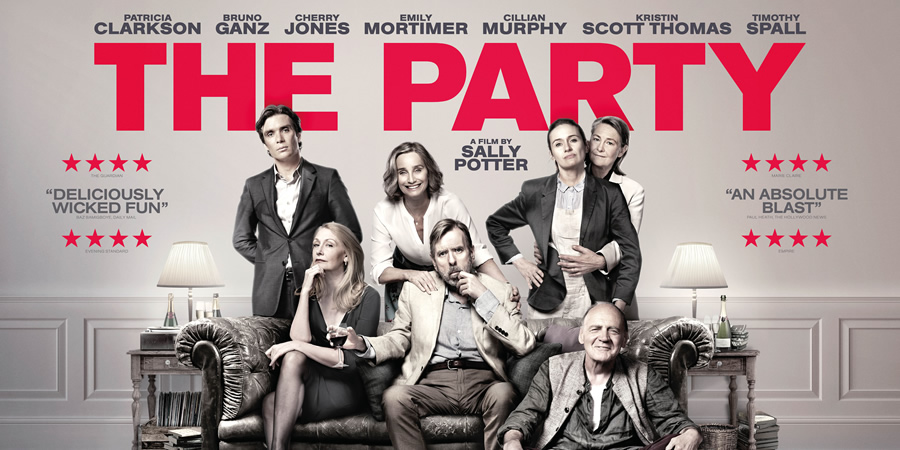 With a vague but authoritative title, Sally Potter’s The Party possesses the immersive capability of a theatre production. It’s as ludicrous as The Dumb Waiter (Pinter, 1957) and as tense as An Inspector Calls (Priestly, 1945). With a running time of just over an hour, The Party relies on the deliverance of a sharp script in a relatively confined performance space. Janet (Kristin Scott Thomas) is celebrating her newly appointed position as the UK minister of health, however, the celebrations soon take a turn towards Sartre’s belief that ‘hell is other people.’

The Party’s cast play cynics, comedians and fools to orchestral perfection. It unravels like one of those rolled strawberry belts: it’s sour but sweet and the combination just keeps coming. Janet’s husband, Bill (Timothy Spall), sits haggard in his armchair, playing vinyls, observing the soirée. When Bill interrupts the champagne pouring with ‘I have an announcement…’ everything spirals out of control.

The Party’s foundation is its characters, and rightly so. Graded in B&W by cinematographer Alexey Rodionov, characterisation and script become central to the audience’s attention. Potter flaunts her ricocheting aphorisms with lines like, ‘shut up Gottfried, your clichés are unbearable’. Most are delivered by April (Patricia Clarkson), who struts assertively, occasionally leaning on the mantle, turning to snap at Gottfried (Bruno Ganz) in her black dress. They are an unpredictable couple and the repartee between them inspires hilarity. Gottfried is a self-proclaimed spiritual healer, his life lessons are often shot down by April’s acute realism and assertiveness.

In truth, The Party is a classic recipe for disaster. With a generous helping of cocaine, a gun, adultery, a group of narcissists and some burnt vol-au-vents, like Janet, we all ask: ‘how did it come to this?’ Jinny (Emily Mortimer) and Martha (Cherry Jones) are a couple expecting triplets, banker Tom (Cillian Murphy) is self imploding over his cheating wife, Marianne. Bill is terminally ill and having an affair and Janet also has a secret lover. Phew. It is indeed a melodrama, but a sophisticated one at that. The ensemble uses farce as well as a master swordsman wields his blade. Jinny throws up in the same toilet Tom snorts coke from, a window is smashed, Bill is knocked catatonic and Janet finds Tom’s gun. Although we are gifted with this action, a lot of the characters’ selves are left for us to assemble, like a jigsaw puzzle (the 1000 piece kind).

The short running time works well in conjunction with the confined performance space, and the B&W picture is a luscious choice. Everything in The Party appears to be designed for eruption. In retrospect, as each guest arrived, none would’ve guessed that the evening would play out in the way that it does. The unseen Marianne appears to be catalyst for all that goes wrong. She is married to Tom, but is seeing Bill. When the doorbell rings and everyone expects it to be her, Janet grabs Tom’s hidden gun, rushes to the door and yells to a figure the audience cannot see: ‘You told me you loved me. Me! You traitor!’ Cut to black.

So, if you get the opportunity treat yourself to a viewing of this delicious film.