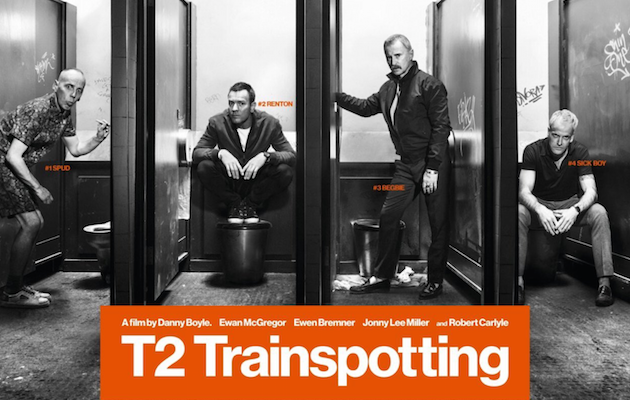 Long awaited sequels often have fans waiting many years for what sometimes ends up being a very average rehash of the original. Last year alone we saw numerous examples of belated sequels (FINDING DORY, JASON BOURNE) with some not as successful as others. Audiences may feel that very few good sequels ever get made; however, Danny Boyle’s T2 TRAINSPOTTING may be the closest thing we get to this in 2017.

When the first trailer came out for T2 TRAINSPOTTING (or simply T2) we were treated to another serving of the famous ‘Choose life’ monologue from the original with some tweaks for a 21st century audience including mentions of Facebook, revenge porn and zero hour contracts. We were also left with the iconic image of Ewan McGregor propped on the hood of a car gasping for breath before cracking a smile; a shot straight from TRAINSPOTTING but replicated 20 years later. These callbacks may have been to reassure original fans that they wouldn’t neglect the legacy of TRAINSPOTTING but it came across more like they were trying to replicate the original. But anyone that has seen the 2017 sequel can reassure you this is not the case and it hits the right amount of nostalgia with references to characters, archive footage from the original and homages which are all done with nothing but love and respect. Even the reimagined ‘Choose Life’ monologue doesn’t feel like a desperate attempt to recreate the magic of the original like the trailer led us to believe. The buildup to the scene is perfect, as is Ewan McGregor’s performance as he goes from reminiscing the origins of the phrase to anger against the society which he finds himself trapped in.

Seeing the much loved characters 20 years later is a joy and where they find themselves feels exactly like where they would be after all these years. Renton (McGregor) is trying to make a life for himself away from Scotland, Sick Boy (Miller) is still working his seedy ‘get rich quick’ schemes, Spud (Bremner) is washed up and trying to be a better man and Begbie (Carlyle) is exactly where you’d want him to be: in prison! The premise of T2 is that after 20 years Renton finally returns back to Edinburgh to confront his old friends and Begbie. The character interactions that occur as a result of the previous film’s events fills the entire 117 minutes of screen time, and while the plot is quite forgettable and quite possibly the least impressive part of the film it doesn’t matter. Danny Boyle puts the focus on the characters and not the plot, a refreshing change from some of the big Hollywood blockbusters which populate our screens. And let’s not also forget the plot to the original film being essentially Scottish heroin users and their daily interactions leading to the final act of a drugs deal in London. So while the plot may have been fairly lukewarm in T2 TRAINSPOTTING it was by no means a groundbreaking or complex piece of work in the original. It’s the dialogue, the music, the characters, the direction and how it captured the zeitgeist of the time that made Trainspotting the cultural phenomenon it is today, and it’s the same elements that make T2 a worthy successor.

All the performances are captivating as you’d expect but in particular Robert Carlyle’s fearsome Begbie is given more to work with as he has to deal with his family and we are treated to moments where we almost see hope for him and the manic glint in his eyes is replaced with love, but not for long. Moments like this flesh out his seemingly one dimensional manic persona from TRAINSPOTTING and attempt to allow us to sympathise with him, or at least understand him, as he must come to terms with his son’s rejection of him and also face the ghost of his father. We also get to witness more of the fantastic chemistry between Sick Boy and Renton, a more complex relationship after 20 years of resentment and guilt, which is examined in a gripping yet hilarious scene where they are forced to sing their way out of a corner during a karaoke night. The direction from Danny Boyle has obviously evolved, considering he has directed nine films since TRAINSPOTTING, but we are still treated to the occasional visually inspired shot like the camera becoming the microphone during the karaoke scene and Renton swooping in to save Spud from falling off the ledge of a building.

Considering how important TRAINSPOTTING was for its time, in regards to capturing the mood of the time, condensing the pop culture of the decade into a film and ultimately how it cemented British film as a worthy contender to Hollywood, Danny Boyle and the cast and crew faced an uphill battle selling the 20 years later sequel to an audience. But while not every fan will love it, it certainly feels true and fresh which is important because ultimately it will always be compared to the original and it doesn’t just try and replicate the previous successful template. Ultimately, T2 wasn’t a necessary film (but then again even great sequels aren’t always necessary) but it was undeniably fun to watch the characters reunite and visit Irvine Welsh’s universe once again.