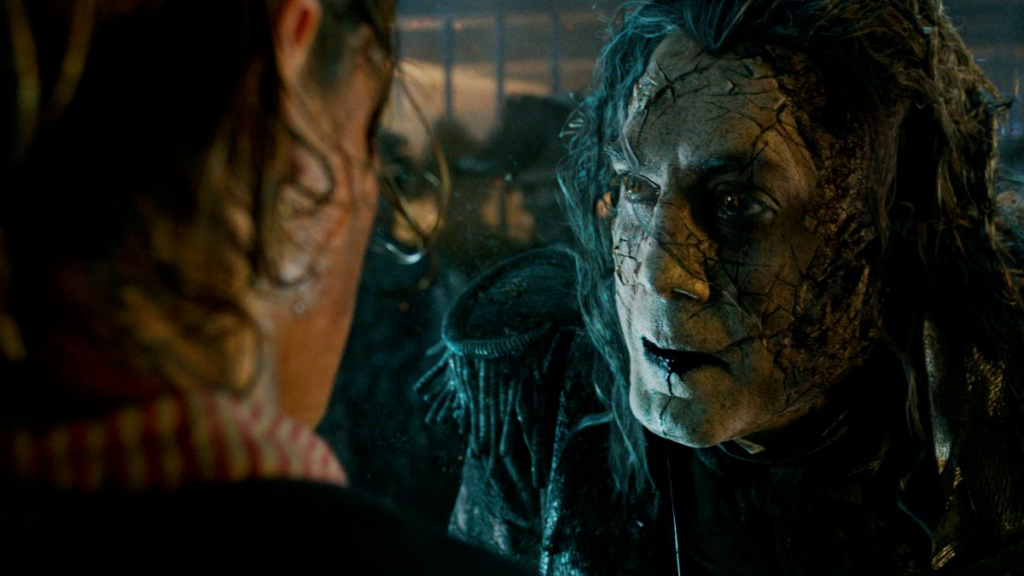 The fifth instalment of the ‘Pirates of the Caribbean’ franchise is a film that everyone knew was coming, and yet no-one seemed to really want. It was following the rather forgettable ON STRANGER TIDES (2011), with new directors, stars and crew and with a rather minor marketing campaign. The film was destined to be another boring blockbuster. It is therefore a huge surprise, and a very pleasant one at that, that SALAZAR’S REVENGE turned out to be a great movie.

The film begins about ten years after the events of AT WORLD’s END (2007), although a knowledge of the original three films isn’t necessary for understanding this one. Henry Turner (Thwaites, GODS OF EGYPT (2016), MALEFICENT (2014)), son of Will Turner, wishes to break the curse on his father using Poseidon’s Trident, which can break all curses. Also interested in this trident is Captain Salazar (Bardem, SKYFALL (2012), NO COUNTRY FOR OLD MEN (2007)), who wishes to use it to break a curse that befell him and his crew through the indirect actions of returning hero Captain Jack Sparrow (Depp, EDWARD SCISSORHANDS (1990), SWEENEY TODD (2007)). Together with Sparrow, scientist Carina Smyth (Scodelario, MOON (2009), THE MAZE RUNNER (2014)) and a whole host of returning and beloved characters, such as first mate Gibbs and pirate captain Barbossa, Henry Turner must locate this trident and survive the wrath of Salazar.

A fresh new iteration of a successful yet somewhat transient franchise, directors Ronning and Sandberg see new characters Smyth and Turner join the pre-established crew for another item hunt across the seven seas, surviving daft but fun encounters such as a building chase or an attack by peculiar sharks. Rather than being bogged down by the pirate lore, a problem that bugged several of the previous films, the focus is on the swashbuckling adventure at hand, and as such the film feels far more like original adventure CURSE OF THE BLACK PEARL (2003) than the plot-heavy later instalments.

The important cast members have been doing these films for a long time now and they know exactly how to act like seafaring lunatics as they should, although some are beginning to show their age a little. Thwaites acts a little out of place, as though he is unsure of why he is wherever he is, but this seems to pair well to the character. However, the real standout role is that of Scodelario, whose intelligent, adventurous Smyth would probably be a hero to young females in the audience if she had been given a bigger role (and if WONDER WOMAN (2017) didn’t have a similar release date).

The first two acts of the film are near-perfect, but problems begin to emerge in the final act. The last confrontation between Salazar and the heroes is rather sudden and there is no build-up to it. An important piece of backstory is revealed, yet it doesn’t seem to be necessary to the film and doesn’t benefit any kind of characterisation or motivation. Several questions from previous films are completely forgotten. The combination of all these minor things makes the last act seem a bit messy or confused.

But for every problem with this film there are two problems from previous films which are fixed. Most of the action takes place at sea, compared to the land-based adventures of ON STRANGER TIDES made the word in the title ‘Pirates’ seem a bit sarcastic. The villains are suitably scary, the cinematography is bouncy and exciting, and the music is bombastic and glorious. In many ways SALAZAR’S REVENGE recreates the glorious swashbuckling feeling of CURSE OF THE BLACK PEARL, the unchallenged high point of the franchise.

Many people have called the fifth film in this aging franchise ‘unnecessary’, yet that’s a complaint that can be levelled at nearly every film ever; not necessarily meaning this film is poor. It’s fun, it’s exciting, and it’s marvellously silly! It’s not profound but it’s highly enjoyable to watch and it suggests that perhaps there is blood in the veins ‘Pirates of the Caribbean’ yet.