If ever a film was a perfect interpretation of an oxymoron then Midsommar (2019) is that film! Chaotically peaceful and beautifully traumatic thematically plague the narrative of this macabre Scandi scare; doing so to unnerving effect. Detached from Aster’s previous work (HEREDITARY 2017)), his recent endeavour into the disturbed and deranged tells a potentially darker story through the veil of an abundance of sunlight. 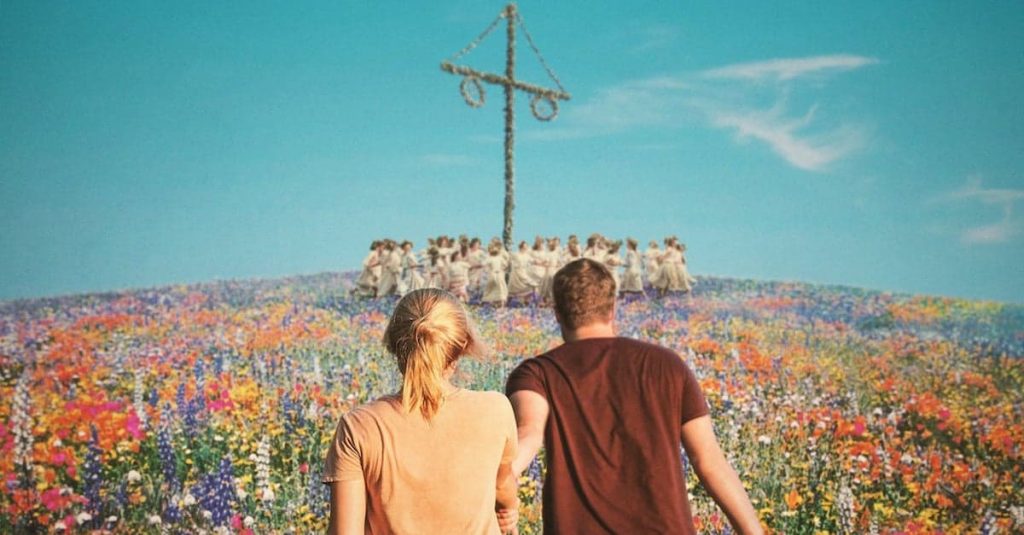 Midsommar opens with breathtaking stills of snow-covered trees under a twilight moon accompanied by relaxing choral music immediately halted by the transition to a busy city overlaid with a blaring car horn. An emotive hint at the progression of stress throughout the film. Dani (Florence Pugh; LADY MACBETH (2017)) is soon taken aback by some unfortunate circumstances within her immediate family lending to her persona quickly souring. The majority of the film sees Dani either upset or angry and this negativity is often in the company of her wavering boyfriend Christian (Jack Reynor; SING STREET (2016)). Tensions develop between the two which appears to be a driving force for the necessity for both to attend the mythic Midsommar festival in deepest rural Sweden. A complete contrast from the initial busy city to desolate countryside where everyone is bathed in white cotton fabric and appears somewhat ethereal and definitely not of this world – a genuine thought which came to mind when trying to decipher the plot twist before it happened on screen.

Dani and Christian are shown many unique but equally tantalising amenities in the minute inbred culture of the Midsommar festival which does very little to calm any doubt Dani has at any moment. The film insists on portraying future events through ornate Scandinavian depictions on tiles, paintings and drawings. These depictions are often used in great quantity without appearing obvious to the audience as if they were almost ‘Easter Egg’ style clues to be enjoyed on subsequent viewings. Many are brightly coloured and childlike with a sinister depiction which is an honest interpretation of how this story unfolds.

The prejudice audiences should have going into this film from the trailer and poster are enough to maintain a unnerving essence of suspense during pleasant and innocent scenes. At first the community are very welcoming and ultimately foetal in nature. A large amount of time is spent wondering how could a society so polite knowingly be so sinister? Soon answered after a disturbing double event, justified as an innocent ritual, shocks Dani and her friends and harks the first of many terrifying actions from unfolding.

The film is split into four quarters which mark the progression of Dani’s character from initially depressed to her newfound confidence towards the final minutes. Director Ari Aster (HEREDITARY (2017)) has said he wrote the story based upon a relationship breakup he had unfortunately experienced and this is subtly echoed throughout the film in a most shocking intense ending. Compared to his previous work, Hereditary, Midsommar is a break away from the ghoulish scare the former was laden with and spends most of its time utilising suspense and false promises to maximise uncertainty.

Hereditary is a very dark film by both nature and lighting whereas Midsommar is almost the opposite, especially when concerning the lighting. Set mainly in daylight in a town where it never really gets dark contrasts dramatically with the underlying sinister intentions of the film. Midsommar is rated an age certificate of 18 and exposes audiences to intense gory imagery. Although the certificate is accurate for small fragments of the film isn’t necessarily a valid interpretation for the film in its entirety. However, it’s the moments between gore strengthened by the unknowing of what to come which allows Midsommar to excel at filling its niche.

Florence Pugh has a tantalising comfort to her voice and personality which transfer beautifully to Dani as a confused and manipulated individual surrounded even by so-called friends in an unknown environment. The cast of Hålsingland natives instil a perfect notion of confusion and unnerve which allows Florence and the other cast members to become completely involved in Midsommar with no immediate sense of security or escape.

As a second feature from Aster, Midsommar is a beautifully unique endeavour which bears all the hallmarks of an Aster directed film. Being so thematically different from Hereditary it would be very interesting to see which ideas are explored in his third feature project. However, it is safe to assume that Ari Aster has found his specialty and is able to delivery time and time again.