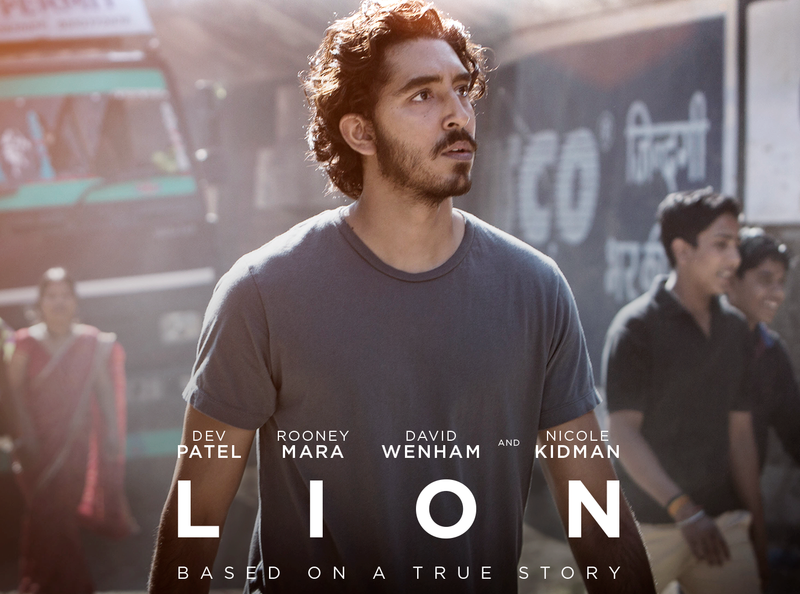 LION has received six Oscar nominations, from Best Adapted Screenplay (being based on Saroo Brierly’s memoir A Long Way Home) to the coveted Best Picture itself. An award it is not deserving of is ‘most relevant title’, having little to nothing to do with lions or their attributes; however, title aside it is a very valid contender for all of its nomination it has received.

LION is the story of one man’s journey from and eventually back to his home of India. As a young child Saroo (Pawar) gets separated from his brother when he accidentally ends up trapped on a train which takes him across the country. A mistake which forces him to live homeless for months on the streets of Calcutta, before being adopted by an Australian family. Twenty years later Saroo (Patel, SKINS (2007-2008), SLUMDOG MILLIONAIRE (2008)) begins to mourn for his lost family and initiates a search to find them again.

Dev Patel has won many awards for his acting before and his good performance here should come as no surprise. However, the real show-stealer is a young Sunny Pawar who depicts Saroo as a child for the first act of the film. He does a great job of contrasting the bright optimism of a cheery child against the dark world of adults and other unknowns, and his innocence and naivety  helps emphasise the thoughts and feelings of Patel later on in the film.

Depending on expectations for the film audiences may be surprised with the tone and outcome of the film. Those who expect it to be a feel-good flick about an adopted child reconnecting with their family may be surprised with how dark the film is at points, particularly to do with members of Saroo’s biological and adopted family. Yet those who expect it to be a sombre look at the psyche of one displaced from his country of birth may not expect the rather cheerful last ten minutes of film, and especially not the end card that reveals the meaning of the film’s title.

Despite this, the film is solid and enjoyable throughout. The cinematography works well – especially shots of the landscape and natural areas of Australia and India – and the music throughout works well to emphasise the intended mood or tone. Saroo’s plight is constantly empathetic and the conclusion to his story is depicted well.

The main issues with the film come from loyalty to the source material, and assumedly to reality. Several parts of the film are undoubtedly included since it happened in real life too, yet their presence steers the film towards melodrama slightly. One of these aspects is Saroo’s girlfriend Lucy (Rooney Mara, CAROL (2015), THE GIRL WITH THE DRAGON TATTOO (2011)) whose role in the story is minimal and irritating despite her high billing. Another part of the story that seems questionable concerns the acquisition of some information near the end of the film in a way that is largely co-incidental. Perhaps this too happened in real life but it feels bizarre in the context of the film.

Overall the film is largely enjoyable, especially the first act, and is solid in most aspects of cinema. However, the film is only that – solid. Rarely does it seem to excel or deliver in an exceptional manner. In general, the film is a delight, however, compared to some of its Academy Award competition LION may be seen as a little lacking.