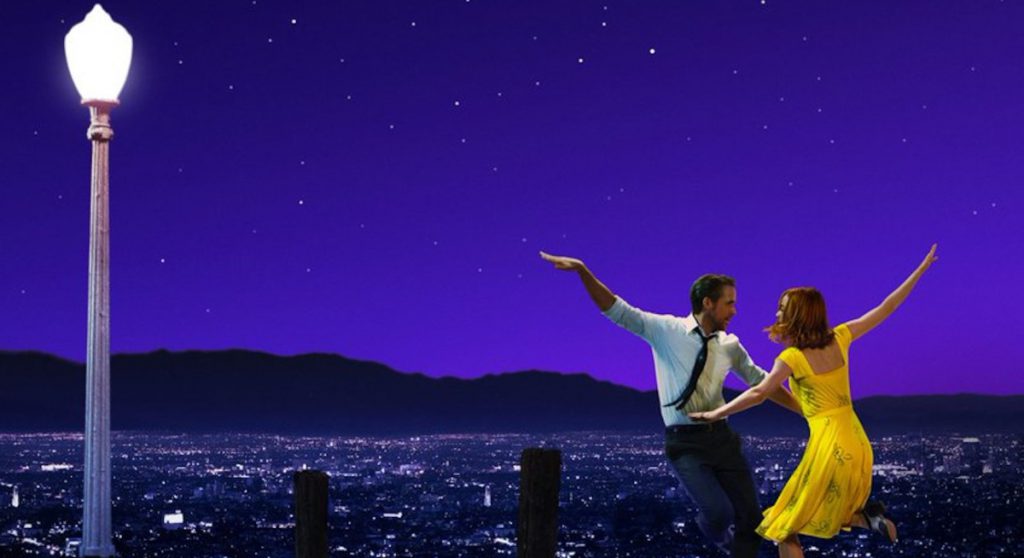 LA LA LAND had been tipped to win big at the Golden Globe and Academy Awards, a prestige which doesn’t even begin to do the film justice (Taking an impressive 7 Golden Globe awards at this month’s ceremony). Both an old-fashioned romance and a musical which happens to expertly critique ideas of stardom, modernity and depicts the pursuit of dreams to be both all-important and emotionally crippling. The film is simultaneously heart-warming and harrowing, leaping between moments of unbridled joy and soul-aching sorrow paired to the adept timing of the songs and score which are masterfully written and performed. Despite being a rather late-minute arrival, it absolutely deserves its place at the top of the awards-season billings.

The film follows Mia Dolan (Emma Stone, BIRDMAN (2014) and THE HELP (2011)), an aspiring actress who is embroiled in a crisis of identity, and Sebastian Wilder (Ryan Gosling, DRIVE (2011) and THE PLACE BEYOND THE PINES (2012)), an unsuccessful jazz pianist who dreams of opening a jazz club. They meet a few times over several months and develop an antagonism which turns to romance one starry night, bonding over dreams and passions. Yet when their individual attempts to follow their dreams alienate these dreams and each other their romance is questioned, leading to the development of a particularly emotive ending.

Just as important as the lead roles to this story is the city of Los Angeles itself whose nickname is eponymous to the title of the film and one of the best songs. The idea of this city of stars, where people earn fame or fall by the wayside is a pivotal part of the couple’s relationship; particularly for Wilder. Director Damien Chazelle clearly shows his enthusiasm for the city throughout the film and purposely sets many scenes in ‘Old L.A.’ to emphasize the importance of show-business to that time and location.

Mia Dolan is arguably the main character of the film – her story begins it and ends it, although Sebastian Wilder has a more clearly defined emotional arc with his realisation of the juxtaposition between his dream and the reality that his dream avoids. Both Stone and Gosling perform their roles well – Stone avidly depicts the hopes and fears of her character who unconsciously juggles her dreams and her relationship. Gosling, who already has a musical career with his band “Dead Man’s Bones”, also gives a great performance as a man with a desperate passion for the dying genre of traditional jazz. Whilst their performances are more effective at depicting their individual characters than the relationship, the standard of acting throughout is high.

To be a successful romantic musical the film needed two things which it has in droves: romance and music. As opposed to many romantic films the characters do not feel like their primary purpose and characterisation is to be in the romantic situation – both characters have dreams, ideals, quirks and idiosyncrasies. However, their relationship suggests a greater mutual happiness than most other films might represent. The songs, written mostly by Justin Hurwitz specifically for the film, are all incredible – they are tonally appropriate, well performed, cleverly woven into the narrative in terms of motifs and relations, and most importantly are simply catchy songs. Despite one of the main songs “The Fools Who Dream” (also known as “Audition”) feeling rather similar to The Muppet Movie’s “Rainbow Connection”, the musical numbers are all great in the film.

A rather strange yet enjoyable expressionist style is used through the film, narrating many events through abstract events and alternate mediums, which really benefits the ideas and tones of the film. Chazelle is no stranger to musical films, having previously directed Whiplash, and he definitely understands and appreciates Hurwitz’s music in his direction. Even if a realist directing is preferred by most audiences, all will be able to appreciate Chazelle’s talent.

If there is one issue with the film it is the pacing. The romance between the characters begins rather late in the film, as the beginning is taken up with depicting the characters, their positions and dreams. As a result it feels as though the ideas of dreams and romance are separated a little too much, with the former being the focus of the first act and the latter being the focus of the second. Yet this is a rather small concern and the film holds up regardless of this pacing issue.

This is one of the first films that audiences will likely see this year and it is the perfect release to kick off a new year. It’s enjoyable to all audiences and will take everyone on an emotional thrill tour into unexpected places and conclusions. It attempts to do many things at once and succeeds at all of them to an amazing degree. From the performances to the cinematography to the music, nearly everything about this film works fantastically by itself and in relation to the rest of the film. Don’t be surprised to see this film nominated for many Academy Awards when they are announced on January the 24th.