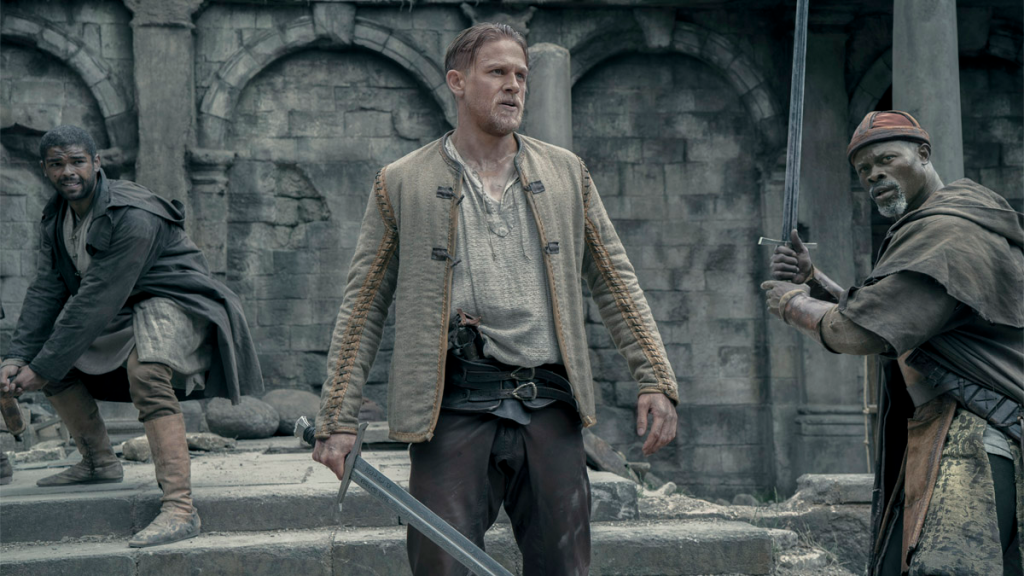 The King Arthur legend has been adapted time and time again, from animated Disney classics to silly adventure-comedies. In one of this summer’s only blockbuster releases not to be an addition to an already existing franchise, respected director Guy Ritchie decided to throw his hat into the ring with KING ARTHUR: LEGEND OF THE SWORD. The first of a planned six-film saga based on the myths and legends of the British hero, LEGEND OF THE SWORD has many hopes riding on its shoulders.

The plot plays around with the original stories to such an extent that it seems MONTY PYTHON AND THE HOLY GRAIL (1975) is more true to the various legends than LEGEND OF THE SWORD is. Taking place years after King Uther Pendragon (Eric Bana, TROY (2004) and STAR TREK (2009)) is betrayed by his brother Vortigen (Law, SHERLOCK HOLMES (2009) and COLD MOUNTAIN (2003)) for the throne, his son Arthur (Hunnam, PACIFIC RIM (2013)) who escaped must fulfil his destiny to rule England by drawing Excalibur from a stone and using it to defeat Vortigen and his evil army. It seems Ritchie chose to use the hero in many fast-paced action scenes such as a MAD MAX inspired race through a city, or a CGI-fuelled 300-esque fight scene once Arthur learns how to use Excalibur. However, the amount of time focussed on the action scenes somewhat appears to detach the audience from the seriousness and vigour of the plot.

Guy Ritchie direction style is recognised and appreciated throughout the film. Some parts bask in his style, such as an early run-in with a corrupt commander; These scenes are a delight – although they only constitute a small portion of the film. Unfortunately, the remainder of the film suffers from trying to meld this cheeky and fun style with the fantasy epic and personal adventure of the script and so eclectically flips between these somewhat uncomplimentary styles. Some of the most important parts of the plot are demonstrated with this unsavoury style, opting for a glossy montage over detailed descriptions in favour of less important scenes given the honour of the Ritchie ‘style’ instead.

Hunnam is rather enjoyable to watch as the protagonist, and he seems to give a fresh face to the old hero. Equally great are Djimon Hounsou (GLADIATOR (2000)) and Aidan Gillen (GAME OF THRONES (2011- ) as resistance members and friends of Arthur; bringing their own styles to the mix. However, the script doesn’t allow for everyone’s acting talents to be explored and unfortunately leaves some performances awkward and typical.

Surprisingly the post-filming production doesn’t quite live up to the thunderous size of the film, something which often can save film which is weak on script. The soundtrack consists of perhaps two songs, constantly repeated. The costumes are standard medieval fare. Beautiful settings are used but never shown with set design being ripped off from other films, and flashy CGI elements are favoured over character progression and development – especially in a rather daft snake scene. Even Arthur, the legendary noble king, acts more like a Clint Eastwood cowboy than a heroic and kind leader despite Hunnam’s impressive acting range. The production seems like a strange and infuriating mix of other films blended together without care or deftness.

Of course, the film never set out to be a revolutionary historic epic, such as BRAVEHEART (1995) or BEN-HUR (1959). With the likes of FATE OF THE FURIOUS (2017) and GUARDIANS OF THE GALAXY VOL. 2 (2017) currently out now, audiences should expect a level of quality to their blockbusters which they may not find too much of here. KING ARTHUR: LEGEND OF THE SWORD is a historical revisionist film that is revising the original story in a misguided direction, losing the unique spirit that made it great in the first place. It seems that Guy Ritchie couldn’t quite pull the sword from the stone with this one.