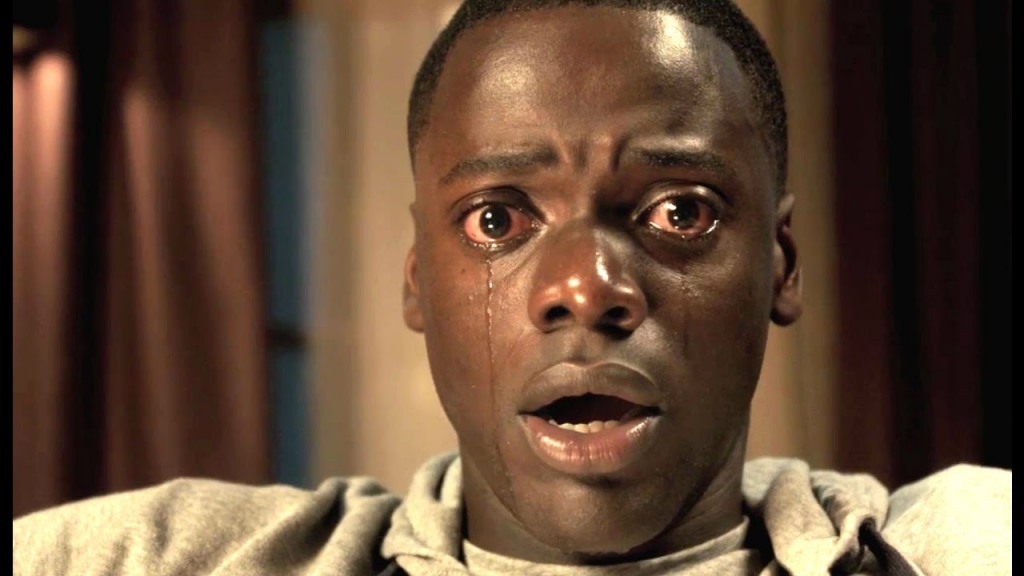 There aren’t many horror films which can pass as hilarious, be a satirical commentary on contemporary social issues and genuinely terrifying. But then again GET OUT isn’t any horror film. The movie is a biting tongue in cheek dissection of interracial relationships in 21st century America epitomised by Chris Washington, our African American protagonist, and his interactions with the family of his white girlfriend, Rose Armitage.

The embarrassing checklist of faux pas that Rose’s family painfully, but often hilariously, touch on include referring to Chris as ‘my man’, telling him that Obama was the best President and trying to justify the fact that the servants around the house are all black – and that’s just the father! While these moments are light hearted it feels like debut director Jordan Peele is issuing a playful warning to those who accidently tread in these offensive, or at least insensitive, areas unknowingly even when they feel like they’re being progressive. It feels like a very personal movie for Jordan Peele, a mixed race director, and there may be copious examples examined in the film which he may have experienced himself.

Watching the film with these problematic moves from the Armitage family is only the first layer of the disturbing nature of GET OUT as things soon turn sinister after the initial meeting of the parents. The score composed by Michael Abels, a mixed race composer, features a single chilling violin which coincides perfectly with Chris’ discoveries around the house; a terrifying choice of instrument for a horror film. The choice to also include African American music to reflect Chris’s culture and is a stark contrast to the sectarianism attitude of the film. Music in the horror genre is of extreme importance to build the suspense and to shock the audience. GET OUT joins the list of other horror classics like THE SHINING (1980), PSYCHO (1960) and JAWS (1975) which are fantastic films only made greater and scarier by a perfect score.


All of the characters feel completely believable and are delivered well by the respective actors. Bradley Whitford (SAVING MR BANKS, 2013) excels as the father trying too hard to embrace his liberal side, Catherine Keener (CAPTAIN PHILLIPS, 2013) feels so true as the overbearing mother and Allison Williams (First major feature film role) embodies Rose Armitage who appears to be the heart of the film as she passionately embraces the interracial relationship with Chris. However, none of these performances shine as much as Daniel Kaluuya’s Chris Washington. Kaluuya isn’t the newcomer many would believe him to be despite not being a household name yet. He’s given a fantastic dramatic performance in BLACK MIRROR (2011 – present), proved he can hold his own against Rowan Atkinson in JOHNNY ENGLISH REBORN (2011) and even starred in SKINS (2007 – 2013) when he was younger. It’s good to see him finally get his big break with his name at the top of the bill in this vehicle which has grossed nearly $200 million worldwide so far. He plays Chris with an air of understatement at the start as he proves to be an average Joe but soon as he’s pushed out of his comfort zone we see the vulnerability and tears surface and the audience completely roots for his likeable and endearing performance.

GET OUT is a great addition to the horror genre which is likely to survive the test of time. It is a clever self-aware movie that delivers an important message with the right amount of subtlety while ensuring the audience are thoroughly on the edge of their seats throughout.