Double Date’s official pre-release trailer came with the warning, ‘its time to paint the town red’, and it’s a good thing it did, because from the get go, Double Date is a stylistic gore-fest! Fortunately, the audience at opening night of Norwich Film Festival 2017 were more than ready, identifying the humour in Double Date’s particular brand of violent overkill. Double Date may be Director Benjamin Barfoot’s feature length debut, but he and writer/star Danny Morgan are no stranger to the Horror/Comedy genre, having both previously teamed up on the short Where Did it All Go Wrong, a tragi-comic reflection on Ron Weasley’s struggles post-Hogwarts. 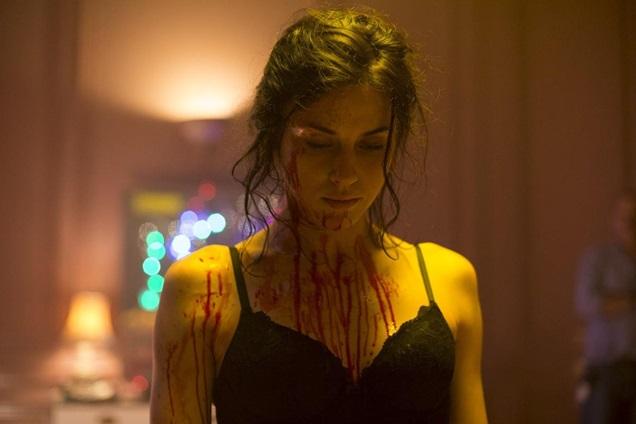 Double Date follows Danny Morgan’s character Jim as he struggles to lose his virginity, the night before his 30th birthday. Unfortunately for Jim, he unsuspectingly runs into sisters Lulu and Kitty intent on slaying male virgins in order to resurrect their dead father. For this Jim may be forgiven.

Double Date’s casting casting is excellent. Danny Morgan strikes an incredibly likeable Jim, whilst Michael Socha’s suitability as Jim’s arrogant ‘jack-the-lad’ friend, Alex, will come as no surprise to those familiar with his recurring role in Shane Meadow’s This is England television mini-series. Similarly Georgia Groome and Kelly Wenham offer a fitting counterpoint in their portrayal of the two murderous femme fatales; a highly stylized scene with Wenham decapitating a male punch bag, particularly memorable.  The guest performance of Dexter Fletcher as Alex’s Dad also proved to be a clear audience favorite.

The film’s soundtrack is superb. The rock guitar riffs of GOAT’s Run To Your Mama the perfect accompaniment to Jim and Alex’s near death struggle. The band do actually make an appearance in the film wearing their iconic performance masks whilst performing during a clubbing scene. The guest appearance of UK rapper Big Narstie is equally stand out, with Alex remarking that he were “a bit nasty weren’t he?” A third music personality appearance that may have been a little harder to notice, was McFly’s Dougie Poynter, who appears in the back of a CCTV shot, as news outlets track the sisters’ murderous rampage.

Visually the film is brilliant! From start to finish the colouring is captivating, with producer Matt Wilkinson revealing that it was greatly influenced by the work of Italian horror Director Dario Argento. Wilkinson’s post-screening Q&A was highly informative, throwing an illuminating insight onto the production process. Wilkinson revealed that Danny Morgan pitched the film to him with the tagline “get laid or get slayed”. Wilkinson also offered up an anecdote of Michael Socha’s audition, where the actor turned up hung-over, turning out to be the obvious fit for the character of Alex.

Overall, Double Date proved to be the perfect opening feature for Norwich Film Festival 2017, and the audience response to the film’s comic elements clear. Director Benjamin Barfoot’s highly stylized visuals, making sure that the blood splatters that filled the screen for an hour and a half where a source of wonderment and humour.