The Norwich Film Festival caught up with the very talented Steven Hall. We are very lucky to have his experience on board as he will be judging some of the short films submitted to the festival later this year.  Steven has been a film technician for nearly thirty years. In the ‘old-school’ tradition he has worked at every level in the Camera Department; Clapper Boy, Focus puller, Camera Operator and now as a DOP (Director of Photography). His work has been seen in Commercials, Documentaries, TV Dramas and Feature Films and he has worked with some of the film industries top Director’s including; Steven Spielberg, George Lucas and Ridley Scott.

Our first question is how did you get into the film business?

I got into the Film Industry via the world of Stills Photography. I was a Photographic Assistant for several Advertising Photographers and worked with them alongside commercials shoots for the same campaigns / brands (mostly cars and fashion). Moving pictures looked a lot more exciting. Plus they had caterers. One of my first actual jobs on a film set was as an Assistant Stills Photographer on ‘The Shining’. However, my switch from stills to film on a full-time basis involved me driving a Winnebago (Artists trailer) for a couple of years to make contacts – I’ve emptied the poo of some pretty well known people.

Do you think it easier for young filmmakers to break into the film industry?

Not at all. I think it’s impossible for young people to get into the industry now. For a start there’s far less structure – the industry is very different from the one in the late 80’s. For example, to get into Drama Production I had to beat 481 other applicants for one of 20 places on the BBC’s Freelance Camera Assistant course at Ealing Studios. Also, thanks to smart phones and affordable editing software, everyone’s a Director / DOP now, no one wants (or necessarily needs) to start as a Trainee Camera Assistant.

Can you explain in a few words for our readers what the role of a DOP is?

A DOP (Director of Photography) is the person who has overall responsibility for the original, visual look of a film as recorded on the camera at the time of shooting. He is often not the same person who either ‘looks through’ or actually operates the Camera. Neither is he the same person who cleans and puts all the gear away on wrap or gets the coffee from craft service – see above note re: Camera Trainees.

What challenges do you have when working as a VFX Dop?

How have you seen VFX changed over the last several years?

Massively! Interesting note: When I was working on SW1 – ‘The Phantom Menace’, the VFX Supervisor (John Knoll) had recently finished developing and launcing a geeky bit of software called Photoshop.

You have worked on films such as Jack the Giant Slayer, Edge of tomorrow , Star Wars: The Force Awakens as VFX cinematographer what type of equipment was used and what was your role within this?

On all the films you mention above I was a VFX DOP (I also shot a lot of non-VFX live action Splinter Unit on ‘Jack the Giant Slayer’). We mostly shot on the same format and cameras as the Main Unit, although I shot some Vistavision on ‘Edge of Tomorrow’. The saying goes, that as a VFX Unit, you shoot the stuff that the Main Unit hasn’t got time to shoot and the stuff the 2nd Unit isn’t clever enough to shoot.

How does 3D impact on your work as a DOP? Do you enjoy shooting in 3D?

It makes for a very long day. And no.

What is your favourite piece of camera equipment?

I get asked this a lot and my standard answer is: Anything that doesn’t breakdown.

You have had the opportunity to work with some of the best directors in the world, such as Steven Spielberg, J.J Abrams, Bryan Singer etc…Do you have any personal highlights from working with these guys?

And George Lucas and Ridley Scott? They’ve all had their moments. However, watching films like ‘Jaws’, ‘Alien’ and the original ‘Star Wars’ before I was in the industry and then eventually working with the same Directors, well that’s pretty special.

You have been involved in short films in the past and advice you would like to pass onto short film makers?

Good question. I’d definitely question why you were making a short film and what you want to get out of it at the end. I’d also leave any ego at home – along with concept art, statements about showing it at Cannes and any sort of desire to see your name on the big screen. Concentrate on the script, performance and how it looks. Keep a short film short and think quality rather than quantity.

Can you tell us what you are working on at the moment?

I wrapped the 2nd / VFX Unit on ‘Assassins Creed’ in Slough last week (3 weeks). 2015 was a busy year. I started the year Directing and DP’ing the 2nd Unit on ‘War & Peace’ in Lithuania, Latvia and Russia (5 months) then I went to the Lake District and Scotland to shoot and direct the 2nd Unit on ‘Swallows and Amazons’ (3 weeks). In October I went to Botswana and South Africa to shoot the 2nd Unit on ‘A United Kingdom’ (5 weeks) and I finished the year shooting additional photography on ‘Bridget Jones Baby’ in London (2 weeks).

How do you think we can continue to build the film industry in East Anglia especially as we have such a wonderful landscape for filming?

This is the problem: everyone thinks that the East Anglian landscape is all we can offer. To answer this question with the sort of passion and feelings that I have about the subject would take far more time than I have.

Do you think East Anglia needs to promote itself more as a film destination?

If you get the right people to spread the word (and I don’t mean the delusional wannabe’s who currently seem to be doing this, I mean people who actually work in the film industry) it would be a lot easier and the region would be far busier.

And finally what advice would you offer those wanting to become involved in the camera industry?

Try and be born the Son or Daughter of a parent working in the industry already. 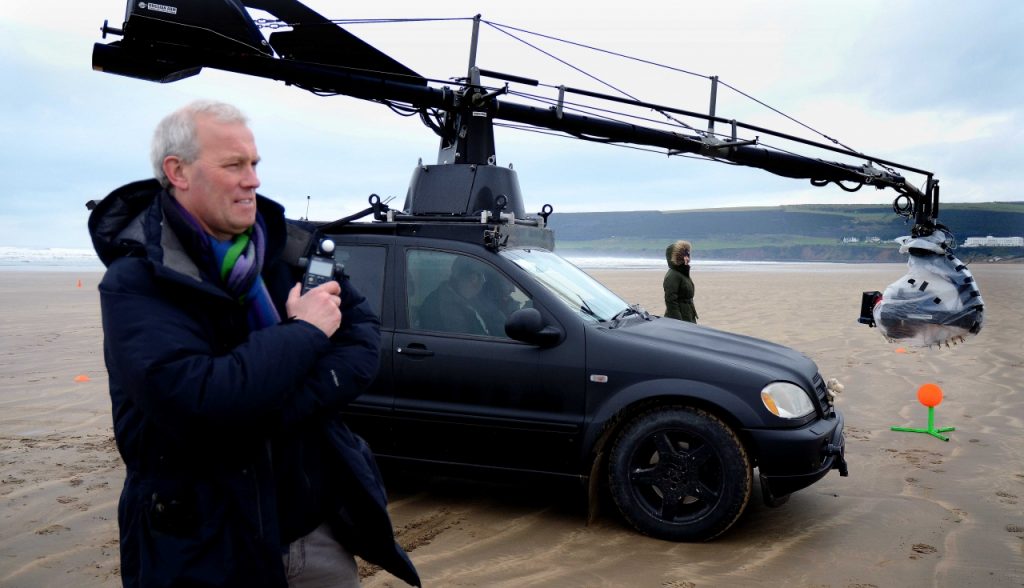