The Norwich Film Festival spoke with the incredibly talented Amanda Posey who is a twice British Oscar® nominee and a BAFTA winning producer with credits including Brooklyn (2016), An Education (2010) and Fever Pitch (1997) to name but a few.

To add to her continued talents, she is joint owner of Wildgaze Films with fellow producer and long term friend/collaborator Fionla Dwyer.   Amanda is married to the equally talented Nick Hornby whose written such classics as Fever Pitch, High Fidelity and About a boy.

NFF: Firstly, I think we should start with Brooklyn. This was an incredible film with a great cast (Saoirse Ronan, Julie Walters, Jim Broadbent). I was intrigued to firstly find out this film came along for you to produce? And secondly, what was it about this story that made you want to it bring it to the big screen?

AP: Finola my producing partner and co director of Wildgaze Films read the book first.  It really stayed with her – she’s a New Zealander who’s made her life 1000s of miles from home, and her own mother emigrated from Ireland to NZ about the same time as Brooklyn’s lead character Eilis.  There were however many companies after the book but Colm Toibin the books author hadn’t yet agreed a deal.  A chance meeting through a friend in NY meant that Finola met Colm, and he gave her the opportunity to option the book.  Finola then brought it to me and to Nick ( who’d adapted An Education for us), Nick loved it and with him on board with us, the BBC backed the development.

I personally loved the archetypal nature of the story – it felt almost like an untold fairytale, but one very rooted in real experience.  All the pains and heart wrench of leaving home were there, as well as the draw of the new world.  I thought Eilis was an unusual, complicated and mesmerising lead character.  I also loved the emigration story being told very fresh from a young woman’s POV.

NFF: Let’s talk money, with the previous success you have had with films such as An Education did you find it was easy to find funding for Brooklyn? Or did you come across any financial challenges? If so, how did you manage to work through these?

AP: Brooklyn was in fact very tough to get funded.  An Education was successful and well received, but not a Box Office hit as such.  That said Finola had also produced Quartet in the meantime (not a Wildgaze film) which was very successful at the UK BO and several of the international territories.  However, Brooklyn would be starring Saoirse Ronan a young and proven talent but not a BO draw and never in an adult role; the book was well known but not a wide best seller; John Crowley was admired for his stage work and earlier films but financiers were nervous about his most recent film not working.  It was also hugely challenging to mount: it needed New York, distinctively Brooklyn exteriors as well as small town Ireland; it needed the transatlantic crossing and elements of America that felt a long way from 50’s Ireland.

Finola spearheaded finding a solution to these challenges, sending out a look book to locations all over the world and working out what financing they could bring us, as well as what matched the vision for the film.  In the end Montreal, Dublin and Enniscorthy and then 2 days bespoke filming in the Brooklyn brownstone streets and Coney Island made it all work, as well as bringing sufficient soft money from Telefilm, Irish Film Board and the regional funding bodies in both countries, plus post in the UK, making it possible to be a 3 way UK, Ireland, Canadian co-pro.

NFF: Let’s keep rolling with this money conversation, for young producers/filmmakers out in the world do you have any advice for them around how to get support around funding their own projects? What’s helped you in the past?

AP: Never give up; one of our funders on Brooklyn we had to go back to 4 or 5 times after they’d said no before we converted it to a yes.  If the market is saying your film is too expensive for its elements, there’s little point arguing – instead work on reducing the budget. Have conviction in your own project – this may sound obvious, but if you don’t 100% champion the actors you’ve cast, the director, the script and potential of this story etc… then no one else will.

NFF: Focusing on the films you have produced over the last few years, you have some incredibly strong female leads (Carey Mulligan, Saoirse Ronan, and the soon to be Gemma Arterton in We Happy Few) all playing really fascinating characters, have you intentionally selected stories more recently with strong female characters? If so, why?

AP: I can’t deny that I may find a stronger affinity to a story with a female lead, but I suspect it’s more that there are many more UNTOLD stories about women; and often that an unexamined female perspective can bring a fresh way in to worlds we may have seen before.  We do have a couple of films in development that have entirely male leads now however.

NFF: Over the year’s you have produced a couple of Nick’s (Nick Hornby) books including Fever Pitch, The Long Way Down and he’s also written the screenplays for films you have produced such as An Education and Brooklyn. Clearly this is a great partnership, but how does this collaborative process work for you both? Does he bring you an idea or do you bring him the idea? And then do how do you decide how you are going to move forward on an agreed project?

AP: As Nick is my husband the ‘pitching’ relationship is not the same as with a writer who isn’t at home every night!  In the case of Brooklyn, it was Finola bringing him the book; but in many cases Nick floats an idea, or emails me and Finola a link to story or article, or he recommends a book. We’ve been much more circumspect about adapting his books for screen and since Fever Pitch have largely avoided it (with the exception of A Long Way Down).  It’s more complicated because he’s both involved and not involved (as he’s not adapting and doesn’t want to adapt his own books – as  memoir Fever Pitch was a different beast).  We both prefer to work properly together with him as screenwriter on new projects.

NFF: There’s been lots of media discussion recently around the lack of diversity in film – how have you seen this from your time being in the film business? Do you feel there is still a lot more that needs to be done to help diversity in the film world?

AP: It’s about widening the number and variety of voices contributing stories.  How we do that is tricky but an awareness is a big start.  We as producers need to actively look for these stories, and development financiers need to support them.

NFF: I always enjoy hearing about how it all started, and I was wondering how it all began for you – was producing always something you wanted to pursue? And whilst working in the early days of your career in film did you have any mentors who influenced your decision to become a film producer?

AP: I did a lot of theatre at university – there was next to no film happening at university at that time – and as I got more interested in film there, I assumed I’d want to direct as I wanted to be across the whole project, that’s how it was in theatre.  It was on my first film job – working for Stephen Woolley – that I got to see how creative and integral the producer’s role is that I realised that was both where I wanted to be and something that suited my skill set much more than directing.  When a director friend brought me Fever Pitch (it was early days of its hard back release but already gaining a cult following) and it turned out Nick wanted to write it, I took it to Stephen who I was working for this time in development.  He didn’t know the director and of course Nick was an unproven screenwriter, but he said – you believe in them, you should do it yourself.  That faith – and later his and Nik Powell’s support when they came on board as exec producers on the film – gave me the impetus to take my first step, set up a company (Wildgaze Films even then) and option the book!  And now we’ve just finished working alongside each other producing WE HAPPY FEW (aka THEIR FINEST HOUR & A HALF) so it’s been a happy turn of events.

NFF: You have an incredible working relationship with long-time producer Fionla Dwyer. How did you both meet? And how did Wildgaze Films come about?

AP: We both came into contact with each other working with Stephen – so I have that to thank him for too – Finola was producing BACKBEAT with him at the time.  We shared an office on a number of projects working alongside rather than actually WITH each other, and then started working more closely on her Scala projects, and once we went independent we decided to share an office, an assistant and overheads… It was only a matter of time I suppose that we then started working together, knowing each other really well and each other’s skills and temperament: An Education was our first joint project and we were Oscar nominated so it was quite a nice kick off!

NFF: What would you advise for up and coming producers, how do you think they can get on the ladder of becoming a producer?

AP: Working with a producer, assisting a producer/in a production company is the very best place to learn it all – seeing it all from that vantage point is incredibly educational.  Alongside that, producing your own short/s also gives you the hands on learning you need.  ON the other hand, Finola came from being an editor, so there are a few different ways to approach it.

NFF: Can you tell our readers a little more about your next project?

AP: We Happy Few is set in London in the Blitz, about a small team making a Ministry of Information film against the odds, and the female screenwriter at the centre of it (Gemma Arterton), and she’s ably supported by Bill Nighy and Sam Caflin (amongst a lovely best of British cast).  Is very witty, moving and a delight to watch.  Anyone who loves movies will revel in it!

NFF: Finally, The Norwich Film Festival focuses on short films, how important do you think the process of short film development is for filmmakers wanting to get onto the ladder of feature productions? and do you have any additional advice for filmmakers out there?

AP: As I said above, making a short is something you really have to get under your belt – only by actually working at the cliff face, however ‘small’, will you learn certain things about your capabilities and how you like to approach the process, from financing to casting to post production. 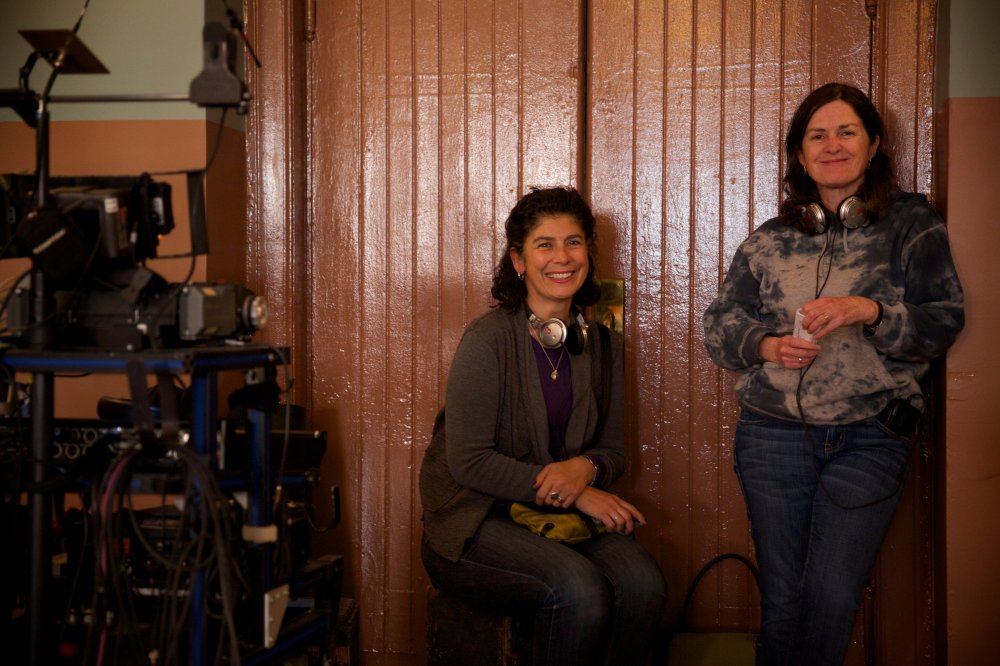