Cordelia Hebblethwaite, Commissioning Editor for BBC Ideas and Steph Watts from Random Acts were kind enough to join us at Norwich Film Festival 2019 for an excellent panel for local filmmakers.

Hosted at St Andrews House in conjunction with the Norwich University of the Arts (NUA), attendants were treated to 20 minutes of some of the fantastic work that Random Acts and BBC Ideas commission, before Cordelia followed up with a short presentation about the pitching process for the BBC. Finally, the two industry experts allowed the audience to find out a little more about their roles and organisations, through an insightful Q&A.

Seven films in total were shown during this event. The first, ‘Open Mic’ was an Irish film about a stand-up comic who had crippling anxiety. He performed his whole routine from inside a wooden box. The next one, ‘Future Perfect’ was about a time capsule that was forgotten and discovered sometime later in a post apocalyptic world. The third ‘CTRL X’ which was an animated contribution by NUA students, parodied a series of ads.

The fourth, fifth and sixth from BBC Ideas, ‘Forget Hygge,’ ‘The Girl Who Helped Discover Dinosaurs,’ and ‘Anti-Social’ all told interesting stories about the world. Whether it was Scandinavian rules, the life of Mary Anning or how people are trying to avoid using social media, each video challenged a previously held belief. The final video, an animated piece titled ‘Do Eggs Contain The Secrets Of The Universe?’ was as hilarious and informing as the title might suggest.

Following on from this, the Commissioning Editor Cordelia Hebblethwaite gave a compelling presentation on why filmmakers should try to pitch something to BBC Ideas in the future. There is a robust system in place in order to help support creators in realising their potential. They are open to working with all sorts of filmmakers and have produced a number of projects in the past that demonstrate their ability to develop talent. While the platform is aimed at giving audiences a new perspective on an interesting topic, there’s movement within that brief.

The Q&A reaffirmed the accessibility of both BBC Ideas and Random Acts, when the audience asked about how they could have their concepts commissioned. Both Cordelia and Steph were really helpful with answering the questions and were able to highlight some of the pitfalls that filmmakers fall into when pitching. Both companies had a very similar outlook to working with talent, although Random Acts’ experimental tone was distinct from the more factual BBC content.

Overall the event was very informative and allowed the audience to watch a series of shorts and learn a lot about the organisations that helped to make them. Hopefully this session has inspired the many NUA students who attended the event, as well as the wider public, to motivate themselves to pitch to BBC Ideas or Random Acts and work with them on an exciting new project. It was also great to see that the availability of digital platforms and social media has given short films a new place to be watched and celebrated and that these British companies are continuing to champion the art form! 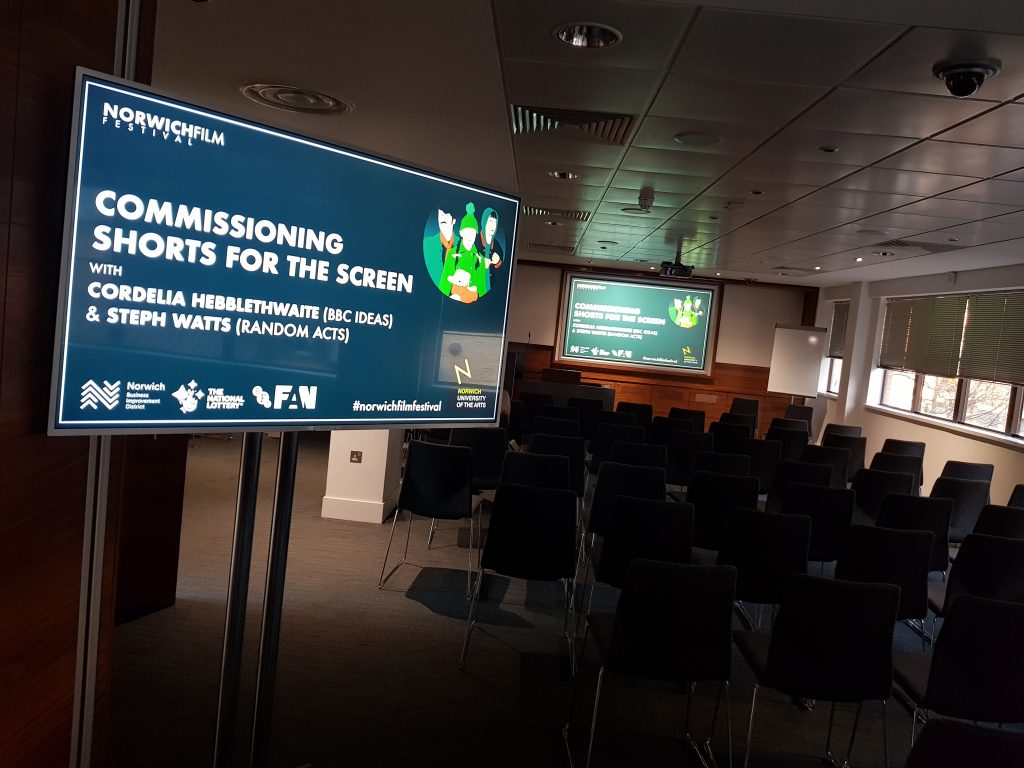