Confessions (natively known as Kokuhaku) is a difficult film to review as a single picture, since it really doesn’t feel like it is one. The 2010 revenge-focused crime/mystery thriller, directed by former comedy filmmaker Tetsuya Nakashima, is crafted with a clear split in the narrative at around the thirty-minute mark. At this point, the story being told largely wraps up in a satisfying and cathartic way, leaving few questions unanswered. This is why it feels particularly odd that the film still has an hour and a quarter left of its runtime. I’m very much of two-minds about the choice to split the film in this way: By continuing the story beyond its expected conclusion, it allows for a deep exploration into the impact of the events; evolving the characters beyond their initial two-dimensional ‘good/bad guy’ presentation. On the other hand, the latter two-thirds of the film feel more like an extended epilogue, never quite regaining the tension held within the first thirty minutes.

The film’s first section tells the story of a teacher, Yuko Moriguchi (Takako Matsu), who reveals to her class of primary-schoolers that she intends to quit, due to the recent death of her toddler daughter. Through a lengthy monologue, a much more sinister reality is revealed, swiftly turning the plot towards one of revenge. This segment is short, fast-paced and tightly written, gradually disseminating exposition to the audience through Moriguchi’s soliloquy. However, whilst this style of gradual exposition is engaging, the choice to explain the film’s plot through a ‘show-not-tell’ format leads to some of the more dramatic moments falling somewhat flat. This is particularly true of the revelation of the crime’s perpetrators, which is framed as a dramatic twist despite the culprits responsible never being introduced to the audience before that point.
The second section of the film, which makes up the remaining runtime, focuses on the lives of the young perpetrators after the earlier events, as well as several of their classmates and family members. Like the first section, this narrative is framed largely through first-person narration, however moves between many different characters giving their personal accounts of events. This idea is particularly interesting, as it allows for a deeper dive into many of the initially one-note characters of the films first section- whilst exploring their distinct moralities and emotional reactions to the preceding events. This is particularly true of the film’s initial antagonists, who’s psychopathic and villainous demeanours quickly falter when their perspectives are shown.
However, unlike the short and concise first section, this part of the film is long and sprawling in terms of narrative flow. Whilst the movement between narrative perspectives is engaging, it often leads to the film repeating the same events over and over with little to no differences each time. Furthermore, as the plot goes on the more fanciful and ridiculous the story gets – almost to the point of farce. Several times throughout I ended up chuckling at what were meant to be gut-wrenching moments, due to them being framed in such an unbelievable and ridiculous manner.

Whilst the films narrative is somewhat spotty and mixed, its cinematography and post-production are absolutely fantastic. The camerawork is solid, with a variety of angles and perspectives that frame the emotions and tone of the scenes beautifully. Particularly of note is the film’s lighting, which is spectacular at certain points. It maintains a dull grey, borderline chiaroscuro aesthetic for the most part, contrasted by the varied use of bright sunlit skies and dark shadows during the films frequent flashback sequences. A personal favourite lighting technique is the use of a spotlight on a character’s face during their inner monologues – a particularly effective and creative idea to highlight personality and emotion.

The editing is crisp and sharp, with a variety of sudden cuts between scenes that keep the action exciting whilst creating a distinct air of menace and unpredictability. These sharp cuts can also be felt within the film’s sound design, which is equally exciting; completely shifting the tone of a scene in a matter of seconds. However, whilst the editing of the music is excellent, the film’s choice of soundtrack can often be somewhat jarring. Whilst sometimes utilising generically traditional instruments such as pianos and strings, the film mostly chooses to follow a score of hard rock music which undercuts much of the tone created by the other techniques. A particularly egregious example is after one of the early emotional revelations within the film an electric guitar heavy Radiohead song begins to play; completely obliterating all emotional investment held and replacing it with sheer confusion.

One final point that should be made about the film is its poor handling of certain sensitive topics, particularly that of HIV. The virus is used as a plot device several times throughout the movie, and the topic is handled with very little grace or decorum. Of course, the same could be said regarding many other plot aspects common within the thriller genre, such as infant death and physical assault, however the use of HIV left a particularly bad taste in my mouth.

Overall, Confessions is a fairly solid, creatively made picture taking a relatively simple narrative, small cast and handful of locations and creating a continuously engaging and interesting film largely through its techniques. That being said, its bloated, confused and downright bizarre plot, coupled by its overextended runtime and curious split, made it somewhat more difficult to fully enjoy. The film is unavailable in most digital formats, however second-hand copies of the DVD are common and cheap. On the other hand if you’re interested in a different film focusing on psychopathy and violence amongst Japanese high schoolers with an emphasis on morality, philosophy and psychology, I’d instead recommend Kinji Fukusaku’s Battle Royale (2000) or the 2006 anime and manga series Death Note, which invoke similar tones and feelings without a single Thom Yorke song. 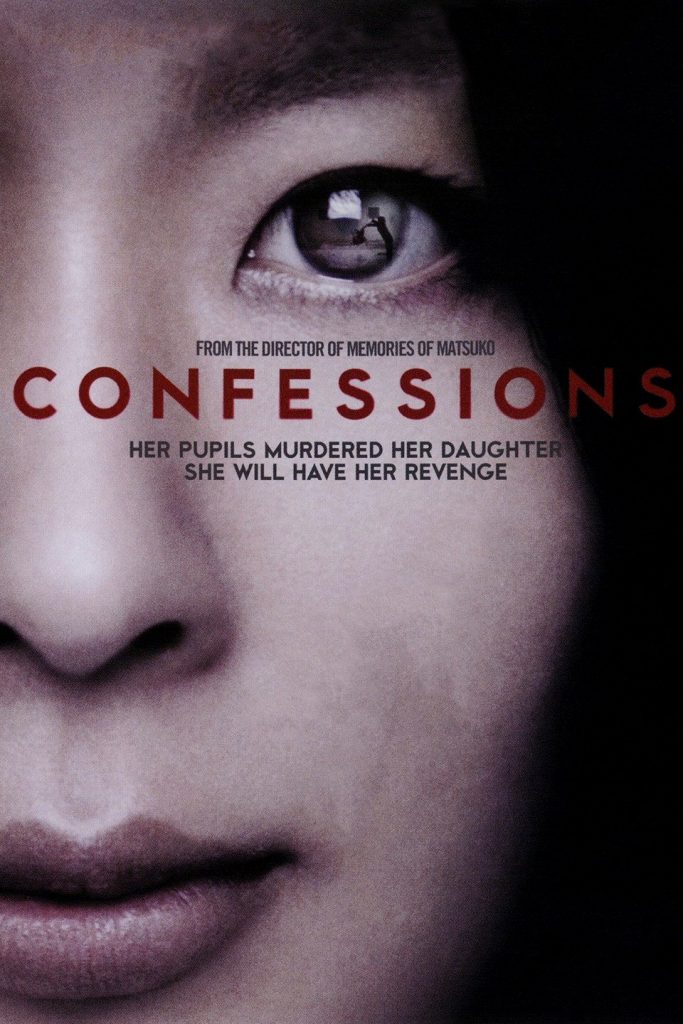