The following is an extract from Film East’s upcoming Screen Dreams zine which explores the many ways music can manifest on screen and how it impacts our viewing experience.

The zine is launching as a free download shortly before our Glam-Rock Double-Bill screening at NFF2021 on 13th November, featuring Rocketman (2019) and Velvet Goldmine (1998). You can find out more about Film East and the zine here, and book tickets for the double bill here for just £10. 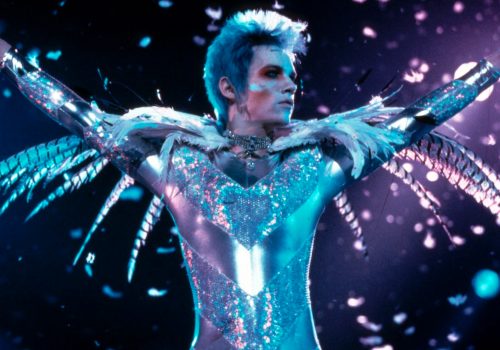 So, what was he like? David Bowie, I mean.

It’s hard to say. He was a man of change; an enigma of his own image, a hypocrite to his cause.

David Bowie based his career on evolution: evolving his identity, image, music — all constantly shifting and morphing to reflect on the world he was living in at that moment. Bowie changed as an artist and as a member of society, turning himself into a piece of performance art, blurring the line between what was real and what was fiction.

So, it’s practically impossible to capture just one “authentic” Bowie, with each of his eras encompassing a new cultural environment. Bowie’s many masks give him his own unique spirit, a spirit that lingers within pivotal moments in popular culture, imprinting on our collective consciousness. Even if you don’t “know” David Bowie, you’ve surely interacted with some version of him: whether it be the famous Aladdin Sane album cover, “Let’s Dance” on the radio, the Goblin King in your favourite childhood movie or the strange alien-like man asking if there’s life on Mars.

This cultural ghost of David Bowie has appeared in various films and tv shows over the years, such as Uli Edel’s Christiane F (1981) and Anton Corbijn’s Control (2007) to name a few. But none capture the Bowie zeitgeist quite like Todd Haynes’ underground classic Velvet Goldmine (1998), which creates a narrative that explores Bowie’s lasting legacy without ever once bringing the man to life.

Told through a Citizen Kane-style narrative, Velvet Goldmine follows journalist Arthur Stuart (Christian Bale), who is assigned to write an anniversary article on the hoax shooting of the mysterious, now reclusive, glam rock star Brian Slade (Jonathan Rhys Meyers). While pursuing the truth behind Brian’s fall from fame, Arthur meets with numerous people from Brian’s past, including his jilted manager Cecil (Michael Feast), ex-wife Mandy (Toni Collette) and former lover/fellow musician Curt Wild (Ewan McGregor), who all end up recalling the influence Brian had on their lives.

A love letter to Britain’s glam rock era, Velvet Goldmines functions as a fictional chronology of David Bowie’s stint as the spaceman alter-ego Ziggy Stardust. Unable to use Bowie’s factual biography (as the musician threatened to sue the production should they use any of his music or life story), Haynes, instead, reimagines the various figures that revolutionised the queer music scene in the early 70s, with characters based loosely on Iggy Pop, Marc Bolan, Brian Eno, Lou Reed and so on. But Bowie is its main attraction.

It’s easy to compare the events of the film to Bowie’s biography: Brian Slade, in order to make his mark on the music industry, creates the space-age rock persona Maxwell Demon with the help of his eccentric American wife and inspired by the chaotic and violent performances of Curt Wild. This is almost an exact retelling of how Ziggy Stardust came to be: Bowie, after failing multiple times to break out in the music scene, created Ziggy with the assistance of his American wife Angie and taking elements from Lou Reed’s and Iggy Pop’s anarchic stage characters. Theatrical, camp and glamorous, Maxwell Demon follows Ziggy’s rise to cult stardom, disrupting the status quo by challenging gender norms and popularising bisexuality. The film’s catalyst — the staged assassination of Maxwell Demon — itself mirrors the abrupt ending to the Ziggy character, with Bowie’s final live performance as the Martian often being referred to as the character’s “killing”. The correlation to Bowie’s legacy is clearly there; so much so, that even Brian Slade’s outfits can be compared directly to those of Bowie’s.

But since Haynes was restricted from using Bowie’s actual biography, what he captures instead is the star’s cultural legacy, creating a Bowie story with Bowie entirely absent. He understands that Bowie simply didn’t have a biography; everything that we know and understand about “David Bowie” is merely part of a performance by an actor playing the role of the rock star. So naturally, his film about Bowie could only be a mirage of the man, focusing, instead, on the influence of one man on an entire generation. Brian Slade, Haynes’ stand-in Bowie figure, is used to enhance the myth of the man; it’s not about the man Bowie was but rather what he stood for.

Like Bowie, we only get to know Brian through the people that surrounded him. His story is told entirely from memories and experiences, giving us a projection of the man, an outline of his persona. We never get to know him for real, just who he was to others. Much like how Citizen Kane, in theory, is about Charles Foster Kane (Orson Welles), it’s the “less important” people in Kane’s life that serve as the film’s protagonists. Arthur, like Citizen Kane’s Jedediah Leland (Joseph Cotten), is the focal point of Velvet Goldmine, as his journey of discovery becomes much more important than the newspaper article he’s out to write.

Behind Velvet Goldmine’s glitz and glamour of fabulous rock stars and extravagant people is a poignant coming-of-age story about understanding yourself in an intolerant environment. Through Arthur’s narrative, Haynes effortlessly interweaves the spectacle of glam rock with the reality of growing up queer in a conservative Britain, allowing us to see how icons like Brian function as a figure that can incite cultural movements and challenge prejudicial thinking.

Arthur has many pivotal life moments with Brian in the background: he masturbates to images of Brian in music magazines, exploring his sexuality and attraction to men. While watching one of Brian’s press conferences on TV with his family, he, during a daydream cutaway, points to the television, jumps up and down and tells his judgemental parents, “that is me!”, longing to be able to be as open and proud as his musical hero. After being kicked out by his parents because of his queerness, he finds a safe place with an adoptive family of fellow glam rock outsiders. He has sex with Curt Wild (which we can assume is the first time he sleeps with another man) after a concert mourning the death of glam rock and Slade’s career. All of these crucial events in Arthur’s early life are narrated by Brian’s ghostly presence.

Through Arthur’s voyage of sexual discovery and independent evolution, Haynes shows us how just one man, a man who we really didn’t know or understand but feel like we did, can revolutionise any entire generation. The spectacle of the myth, the societal idea of the man, has the power to rewrite cultural norms and social standards. Brian’s queer artistic expression in this fictional world (just like Bowie’s in our own) challenges older generations biases while allowing the youth to break free from the repressive restraints of social standards.

Ultimately, this is Bowie’s legacy, and Haynes captures that perfectly. Velvet Goldmine isn’t a film about Bowie. Rather, it’s a film that explores how staged celebrity personalities have the ability to redirect the path of social history. Bowie, like Brian, isn’t just one single concept. Instead, they are understood through personal experience, with each individual reflecting on to them a different purpose and meaning.

So, while Arthur may have asked Cecil what Brian was like as a person, what he really should have been asking about the cultural icon is: “what was he like to you?”

Find out more about Film East and the Screen Dreams zine here, and book tickets for the double bill here for just £10. 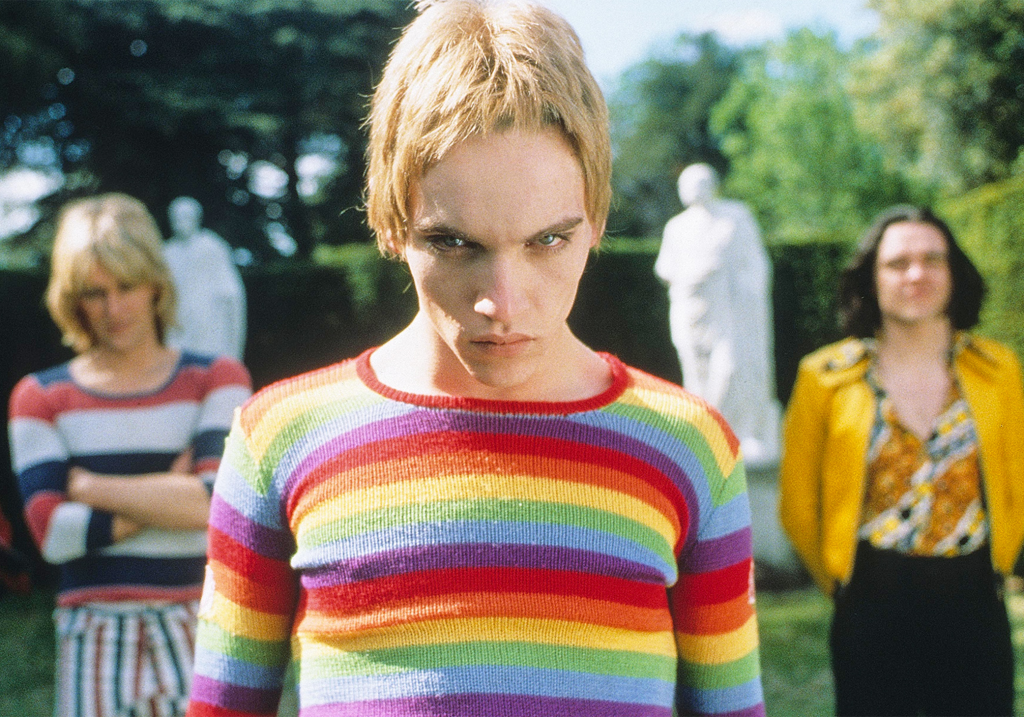