As part of the Norwich Film Festival, I had the opportunity to attend a panel discussion about VFX in films, called “Are VFX killing cinema?”

In short, the answer was NO.

Overall, the discussion was good and entertaining around the importance of VFX in the industry and also how its changed cinema. Throughout the discussion there was balanced argument on the For and Against of VFX in Film. Unfortunately, I didn’t have time to jot down everything which was said, only some things that were mentioned that I found particularly interesting. 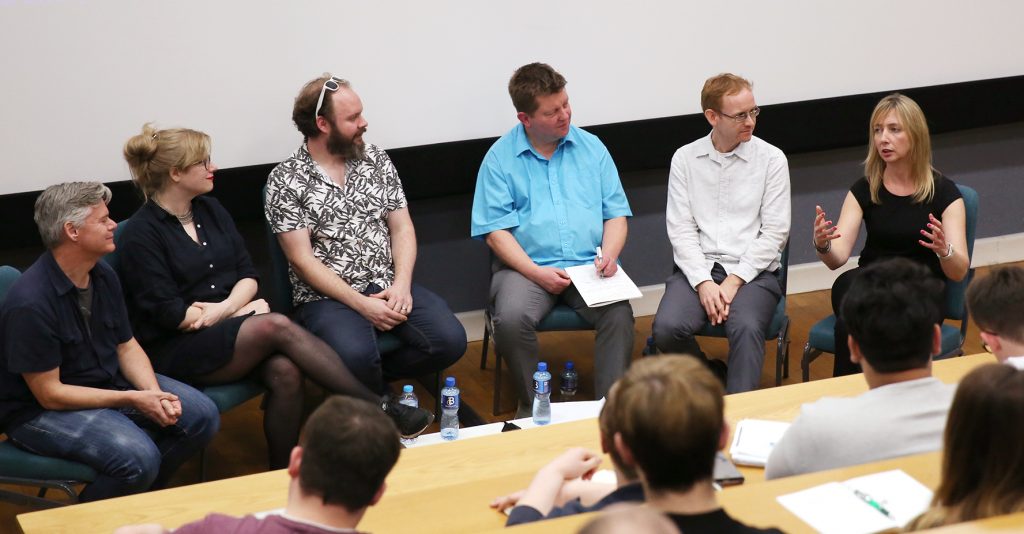 VFX supervisors Sheila Wickens (DNEGTV) and Paddy Eason (Freelance VFX Supervisor) mentioned that many times VFX is seen as a last-minute problem-solving solution; it’s considered a post-production thing, expected to save the day all the time, but mostly it should be considered in pre-production too, to do things right and to see if it’s going to be cheaper to do it digital or physical.

It was noted that while a film is being produced, sometimes filmmakers forget that there are some situations in which it is cheaper to re-shoot a scene rather than ask the VFX team to fix, remove or add a specific camera movement. For instance, Paddy referenced they did this for a film which wanted to make the zoom out from the actors much wider than the footage shot and Sheila discussed when they wanted to remove detail that they got wrong but wasn’t even going to be visible to the audience. In their opinion, the reason this happens is because VFX is digital and therefore things can be changed at any time, but they don’t take into count that it also takes more time too.

On the other hand, Producer Jen Handorf gave her point of view from a production side of things. According to her, it is true that sometimes the producers delay the problems which the VFX team later encounter and need to deal with because they’re the last ones on the production line. For instance, in her last film, they needed to move a painting in a museum shoot, but due to the high insurance costs it was so much cheaper to change it digitally. She also mentions that sometimes it is cheaper to buy footage than generating one’s own.

She noted that maybe the reason why people think that VFX is killing cinema is as a result of more and more blockbusters with super explosions and destruction sequences, that in some way lose empathy of the viewers, because the audience is aware that the buildings are destroyed with digitally. However, this is what has been generating money over the last 10 years and what people have been going to watch to the cinema, so it is what producers want to create.

Also, something that Dan Martin (SFX artist) mentioned in his introduction caught my attention.  He identified that it’s not better physically or digitally, it’s what works better in each case for that film. This raised my curiosity so I read the book Harry Potter: page to screen by Bob McCabe which talks about the creation process behind the films and it noted that every new director says that they wanted to do as much as possible in-camera. For instance, in Harry Potter 5 (Order of the Phoenix) the Hall of Prophecy they were unable to rely on doing this in front of the camera and it ended being made digitally on the computer. The book gave me the feeling that this was something bad, as according to the book they tried really hard to film it physically until they realised that it was nearly impossible. Personally, I thought this was something absurd, I thought that these kinds of decisions were made in pre-production, and Dan Martin confirmed this.

Finally, in my opinion I still don’t understand the obsession to do everything non-digital. I think it should be what works best for the specific shot.