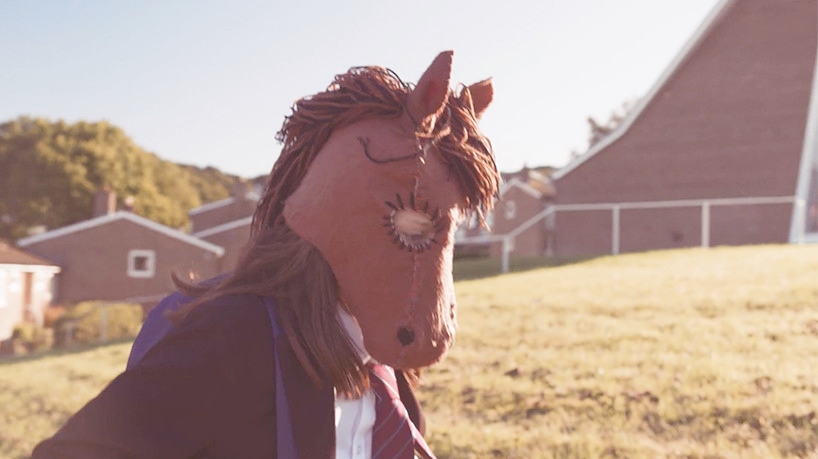 SYNOPSIS: She’d rather not speak and prefers life as a horse, but the girls at school just won’t leave her alone.

STORY: TRiGGA follows a young girl Mae who turns the tables on a gang of bullies with the help of her horse. As physical assaults become a daily reality, Mae retreats into a silent world and stops talking. Even her comedian father fails to get a laugh from her. Mae escapes the harsh reality of school by galloping out at twilight on her trusty steed Trigga.
With girl to girl cruelty escalating, girls are now bigger bullies than boys with many teenage girls suffering in silence. TRiGGA looks at the power of silence and one girl who learns to accept herself and her difference.

DIRECTOR’S STATEMENT: Inspired by events from my own life, I confronted the girls who were bullying me by taking my horse to school. Horses gave me the confidence to be myself and not disappear but say ‘Here I am.’ I was lucky my horse saved me, but many girls are not so lucky and I wanted to make a film where love wins out over cruelty and meanness.
TRiGGA is an inspirational story with an empowering central character and filmed like a modern day western is told with humour and audacity. The film shows how with true grit it’s possible to overcome bullying and finds new friends. Mae’s story is an uplifting portrayal and will hopefully inspire girls to be brave and not suffer bullying in silence.

DIRECTOR’S BIOGRAPHY: Meloni made poetic documentaries for Channel 4, BFI and The Arts Council of England before moving into drama. Her Film4 and Film Council funded short films Lap and Dish were selected by the British Council and screened in competition at International Film Festivals.
Based on events from Meloni’s own life, TRiGGA follows a young girl who confronts her bullies with the help of her horse. TRiGGA was commissioned by Creative England’s and BFI Network I-Shorts3. After a world premiere at Toronto International Film Festival, the film has just won Grand Prize for Children’s Live Action at Oscar Qualifying Rhodes Island International Film Festival. The film also won at Best Directing Award at the Women’s Independent Film Festival in Hollywood and has officially been selected for BAFTA qualifying London Short Film Festival, Galway, Busan, Taiwan, and Underwire (nominated for Best Composer). Meloni was one of twelve filmmakers selected to develop Shy Bird through Creative England, BFI and BBC Films I-Features scheme and was recently selected for Guiding Lights 9 as a directing mentee.